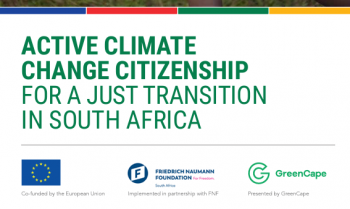 Climate Change is a global threat, but a pro-active response to it can bring new opportunities to the benefit of communities and the economy. A recently launched project, Active Climate Change Citizenship for a Just Transition in South Africa, funded by the European Union and implemented by GreenCape in partnership with FNF South Africa, sets out to encourage active citizens who can effectively participate in democratic processes to communicate with government their needs and priorities for climate mitigation and adaptation, with a particular focus on energy.

The project aims to enable proactive, constructive and collaborative engagement by communities, women and youth in climate mitigation and adaptation.

“South Africa is blessed with sunshine and wind. Similar to our mineral resource blessings, this country is one of the most well-endowed with renewable resources. We aim to create awareness in the youth of the suite of opportunities in a green economy and the great career opportunities that the growing renewable energy industry in South Africa will bring. This will empower and enable the youth to be climate change advocates” said Mary Faulks-Fairweather, Climate Change Champions Project Manager at GreenCape. “The message of this project to the youth of South Africa is that their voice matters in climate policy and decision making, and that they can do things on the ground to make a difference in their communities.”

The EU’s Ambassador to South Africa, Dr Riina Kionka, observed: “Unlocking inclusive green growth for present and future generations, for urban and rural spaces, notably those that today are heavily coal/carbon dependent, is at the heart of the European Green Deal and of our new Team Europe initiative for a just and green recovery in South Africa. We are delighted to support South Africa in its implementation of the Paris Agreement on Climate Change and the Sustainable Development Goals through our Climate Change Champions programme and other initiatives.”

Through the creation of climate clubs and a virtual networking platform, the intent is to build a community of young South Africans who find their voice to meaningfully engage with national and local climate and energy policy, to communicate their vision of the future and who take action at their schools and in their communities on climate mitigation and adaptation.

“We are excited about how this project will capacitate young people, in their communities, to access opportunities in the green economy, and play a participative role in co-creating their future,” said Cecelia Kok, Head of Research and Advocacy at FNF Africa.

“Whilst the focus is on empowering the youth through knowledge and building proactive, collaborative youth networks, the message that we also hope to take to government is that the youth voice on climate has to be taken into consideration when policy making and planning. The request is for the government to be receptive, and listen to the youth. They can bring new and innovative thinking and have a voice that should be heard in policy and decision making influencing their own future. Hear them, engage with them,” said Lindiwe van Staden, Skills Development Project Manager at GreenCape.

The project will be implemented over a period of four years, and will work with young people and their communities in the Eastern, Western and Northern Cape. The project takes a whole-of-community-approach and will capacitate local and regional government authorities, community based organisations and high school educators. All stakeholders have a part to play in the growth and development of the renewable energy sector, and stand to reap the rewards of an increasingly thriving industry.

Please visit saclimatechamps.co.za or email mary@green-cape.co.za for more information about this project.